EEC Environmental Engineering (EEC) was hired to evaluate the extent and magnitude of VOC impacted groundwater beneath a former manufacturing facility.  The facility was identified as a Potentially Responsible Party (PRP) in a regional groundwater plume.  The regional groundwater plume has impacted drinking water resources and has resulted in the closure of a number of production wells.  EEC was retained to determine if the facility was a significant contributor to the VOC plume.

To facilitate a thorough understanding of the affected portion of the groundwater basin and the site conditions, EEC compiled six years of existing groundwater, laboratory analytical, and other site data into a comprehensive Microsoft Access Database.  The database included an easy to use graphic user interface design to allow users with no database knowledge the ability to review, display, and plot reports, time series plots, chemical trends.  In addition, the database was designed as a document management system, with the ability to link to an electronic version of reports, permits, letters, and laboratory data.

The database was linked to an ArcView GIS.  The GIS was developed for two primary purposes.  First, the GIS allowed EEC and other technical personnel to retrieve and display all pertinent data that had been accumulated for the site and affected a portion of the basin.  This ability represented a significant monetary and time savings over the conventional retrieval of data from “hard copies”.   The second and equally important purpose was the ability to present high-quality graphic representation of the site and surrounding areas in a manner that was understandable to attorneys, regulatory personnel, and the general public. 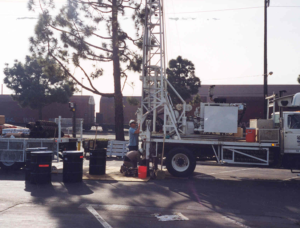 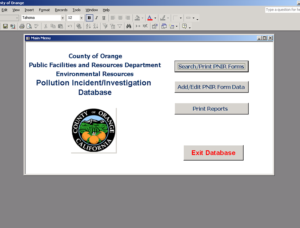 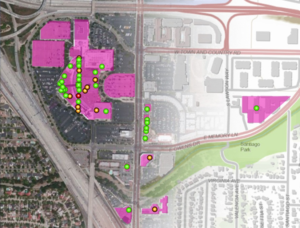